As British as the King

In August 1914, the long-established Germans of Lunenburg County found themselves facing a dilemma: Canada was at war with Germany. They met suspicions of disloyalty with the claim that their roots were deep in the German states of mid-eighteenth-century central Europe, long before unification. They were, then, as British as King George V himself.

As British as the King explores life in Lunenburg County at a time when blackouts were enforced, when there were rumours of spies, and when schooners were sunk offshore by U-boats. Intricately and thoroughly researched, this fascinating historical account brings an exquisite level of detail to the history of the war effort on the home front. Historians and Nova Scotians with Lunenburg roots will appreciate author Gerald Hallowell’s passion for his subject—a passion that echoes that of his previous work, The August Gales, for which he received the 2014 Democracy 250 Atlantic Book Award for Historical Writing.

Features a historical map and 30+ black and white images.

Gerald Hallowell
Gerald Hallowell was born in Port Hope, Ontario, and grew up on a farm in nearby Crooked Creek. For over twenty years he worked as an editor at the University of Toronto Press, retiring as senior editor, Canadian history, in 2000. In 1996 he was elected to the council of the Canadian Historical Association. He edited The Oxford Companion to Canadian History, published in 2004. Since 1989 he has lived in Lunenburg, Nova Scotia. 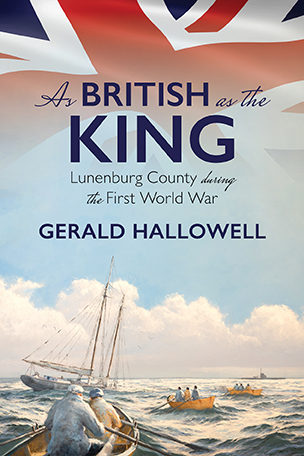